Grandmaster JinBodhi was weak and sick as a child. After moving to Qinghai with his parents, his health condition deteriorated, and he constantly was sick. His parents searched everywhere for a remedy, trying many “secret formula” ointments and herbal medicine soups, none of which were effective. When he was a teenager, he met Grandmaster Ren and learned Energy Bagua from him.

Energy Bagua is not a form of martial arts, but an exercise to maintain health. Through diligent practice, Grandmaster JinBodhi slowly obtained more energy and drastically improved his health. At that time, in the Qinghai-Tibet Plateau, winters often reached below minus 15 degrees Celsius (3 degrees Fahrenheit). When Grandmaster JinBodhi practiced Energy Bagua in winter, he wore a thin piece of clothing, but felt very hot, his whole body filled with energy. Through long-term practice, his health was restored and he learned the essence of Energy Bagua: The balance of Yin and Yang, the flow of energy, and a deeper understanding of life and the world.

Grandmaster JinBodhi improved his physical and spiritual energy by practicing Energy Bagua. He was the first to benefit from Energy Bagua. 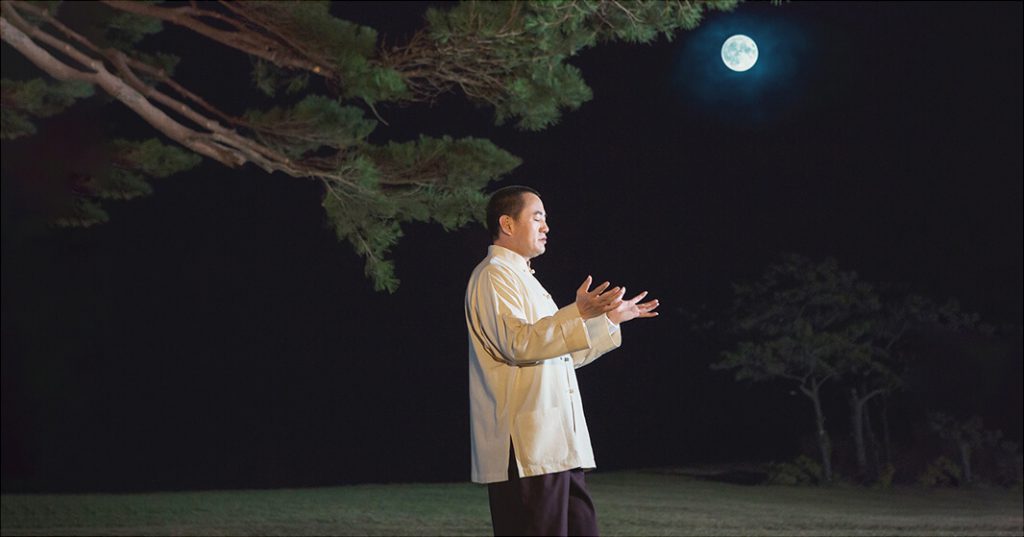 Understanding the State of Energy Bagua

Grandmaster JinBodhi said that after practicing Energy Bagua for just one year, his fitness level was already better than that of children his age. After two years of practice, he became very sharp. Even those who practiced kung fu were no match for him when sparring. He could fight three people and beat them all. Grandmaster JinBodhi said that he seemed to have eyes at the back of his head as he could sense their movements behind him. With astonishingly quick reaction time and his intuition, he always won the sparring matches.

During his continuous practice, Grandmaster JinBodhi also developed a deeper understanding of the philosophy of Energy Bagua. Yin and yang are an important concept in Bagua philosophy and contain the laws of everything in the Universe. Everything in the world contains the energy of yin and yang, life and death, good and bad. Yin and yang’s rise and fall are the driving forces in growing, changing and the cycling of everything in Nature. Some people use this concept in kung fu to attack others and defend themselves. However, Energy Bagua uses this concept to maintain health, prolong life and self-cultivate. So ostensibly, Energy Bagua is similar to other kinds of kung fu, but its internal motif is very different. The practice of Energy Bagua has roots in compassion; with a heart full of love and peace, practitioners practice Energy Bagua for their health and longevity, loving everything in the world and melting into Heaven and Nature.

Tao permeates Energy Bagua, the Tao of yin and yang, of energy, of life, of compassion, etc. Your mind during practice is natural and relaxed, feeling soft and malleable, yet is full of energy. During the practice, you receive the energy of Heaven and Earth, absorb their essence, and finally achieve a state of harmony between human and Nature.

In terms of health, Grandmaster JinBodhi said that Energy Bagua was not created for any particular ailment. Its effect on the human body is holistic, comprehensive and balanced. It can quickly replenish energy in those body parts that lack energy, balance and adjust areas with unbalanced energy, and unblock energy blockages. Therefore, the health effect of Energy Bagua covers the entire body, including internal organs, meridians, blood vessels, bones, joints, nerves, muscles, skin, and even spirit and emotions. It can also improve concentration, intuition and responsiveness. Wisdom, self-confidence and creativity also increase.

Not hidden deep in the mountains, nor secluded in valleys; since Energy Bagua was taught in Vancouver, Canada, in 2006, Energy Bagua rapidly spread around the world. Beneficiaries spanned from plazas in New York to conference centers in Silicon Valley; from many parks in Malaysia, South Korea, Singapore, Taiwan, to libraries in Vancouver, where you can often see Energy Bagua fans circling a tree.

A Steady Path Towards Vigorous Health
1
David is a pharmicist. He was left with back pain problems due to accident one day. He fell in love with Energy Bagua after learning it. Not only did it become part of his daily routine, it also helped relieve him of the pain. He also gained a good night’s sleep, became more fit and …

Energy Bagua is simple and easy to learn. It cultivates the body and mind. In order to help more people gain health and happiness, Grandmaster JinBodhi began teaching Energy Bagua to the public. As practitioners around the world began spreading the word of the benefits they experienced, more and more people joined the practice of Energy Bagua. Energy Bagua has gone viral worldwide. From plazas in New York to conference centers in Silicon Valley, from parks in Malaysia, South Korea, Singapore and Taiwan to libraries in Vancouver, you will often see Energy Bagua fans circling a tree.

This simple and effective cultivation method not only solves various health problems for those who live under pressure today, but also guides them to be kind, compassionate and universally loving. It makes people gradually let go of greed and arrogance and learn to be humble and grateful, elevating their minds and state of life.